The latest editions of introductory texts are becoming easier and easier. At the same time, macroeconomic models used by central banks in their simulations (the so-called Dynamic Stochastic General Equilibrium Models, DSGE) are increasingly microfounded – and thus complex. In a nutshell, BUP Macroeconomic Lessons fill a gap. Surely students will find them slightly more difficult than the most popular textbooks, but their investment will pay off when they attend a Macroeconomics course. It will help them understand that microeconomics and macroeconomics are two different, albeit connected, worlds, because they will appreciate that the two disciplines share the same way of thinking. Even if this were the only Macroeconomics course in their lives, they would nonetheless have acquired the ability to "think for themselves" about the problems that the political economy faces everyday. The book contains the basic classical macroeconomic models: the Solow growth model and the classical AS-AD model in the three markets of labor, goods/funds, and money. The final chapter is a bridge to microfounded theory through the analysis of a two-period economy and the underlying intertemporal choices by consumers and firms. The authors place constant emphasis on the fact that they are studying economic equilibria and on how market forces come into play when the economy is out of equilibrium. The overall result is a less fragmented, more unified presentation of classical macroeconomics. Egea website's Mybook contains a wealth of exercises at various level of difficulty and more data about the world economy (today, in the last 20 years, in the last 200 years).

Luigi Balletta is a researcher of Economics at Palermo University. He received his PhD from Yale University (2010).

Salvatore Modica is Full Professor of Economics at Palermo University. He received his PhD from Cambridge University (1985). 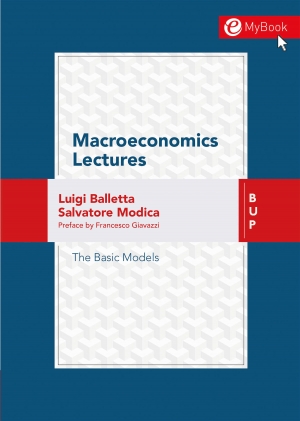