Ideas for the City that Cares

“Livable Proximity is a passionate and compelling call for a remaking of the city under a novel paradigm of relationality and care by one of the most accomplished design thinkers of our time.” – Arturo Escobar

This book is a contribution to the social conversation on the city and its future. It focuses on an idea that has been in circulation for some time and that, in recent years, has received greater attention: that of a city in which everything that is needed for daily life is just a few minutes away by foot from where people live. In addition, it speaks of a city in which this functional proximity corresponds to a relational proximity, thanks to which people have more opportunities to encounter each other, support each other, care for each other and the environment, and collaborate to reach goals together. Ultimately, it isa city built starting from the life of the citizens and an idea of livable proximity in which they can fi nd what they need to live, and to do so together with others. The underlying theme that this book poses is thus the following: can we construct the contemporary city starting from a new idea of proximity? The response given is yes, it can be done. The social innovations of the last 20 years in fact indicate where to start. Many cities in the world, including Paris, Barcelona, and Milan have made a commitment and are taking steps in this direction, offering concrete examples of what this city of proximity could be: a city in which social innovation, care, common goods, communities of place, and enabling digital platforms become the keywords of a new and widespread social capacity to design.

Ezio Manzini is a leading thinker in design for sustainability and the founder of DESIS, an international network on design for social innovation and sustainability. Currently, he is Honorary Professor at Politecnico di Milano. He has taught at several international schools, such as Elisava (Barcelona), University of the Arts (London), Parsons (NYC), Tongji University (Shanghai). His most recent books include Design, When Everybody Designs. An Introduction to Design for Social Innovation (2015) and Politics of the Everyday (2018). 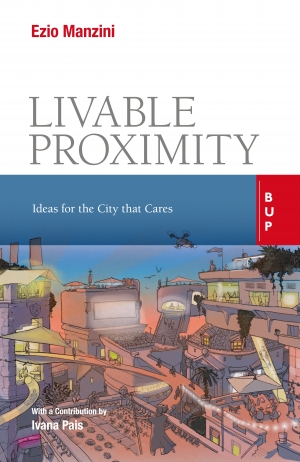